Oh my gosh, this book… will restore your faith in humanity. I like to read it once in a while just to clear my mind of all the bad stuff of this world and get lost in a little innocent hamlet with the village parson and the quirky townsfolk. The thing is though, Jan Karon can WRITE. She’s a really amazing writer and never resorts to cheesiness. It is actually very funny, clever and uplifting. Get it, you will love it!

This is a tightly woven tapestry of village life in a not so fictional town in the western hills of North Carolina. Some live in quiet desperation, some are living large and out loud, and some are just trying to live.

This is an exploration of cultural cross pollination as seen through the eyes of Father Tim, an Episcopal Priest. There are secrets, hidden agendas, nefarious characters, bad actors, and all are in the need of reconciliation with God. In some cases they achieve the elusive redemption by “looking in the mirror”.

This is a great read for non-believers as well as mature Christians with a committed faith journey.

Have great joy in the journey.

This is really a review of the entire Mitford series which I have re-read too many times to count.

If you’re looking for gentle wit, a bit a sarcasm, likable characters, lovable dogs (a few cats), great story lines including some nice love stories, as well as great spiritual messages without it becoming preachy, you will love reading about Mitford and Father Tim.

Although Ms. Karon handles some pretty serious issues such as alcoholism, depression, and child abuse, it’s done without rubbing the reader’s nose in it. There’s no bad language, the strongest exclamation being “blast!”. Her books are G rated when it comes to sex. It’s clear when the characters are physically attracted to each other but you don’t follow them into the bedroom.

As the characters are developed over the course of the series, the books get better and better. In fact, when I first read the last two in the series, I immediately went back to the beginning and read them again because they were so good! 🙂 I don’t think I’ve ever done that before.

In 1885, after her dear Mother Patricia’s death, with both parents gone, Rebecca Galloway leaves her home in Newfane, New York. With a friend’s letter of recommendation, she travels by train to a Victorian Mansion in an elite section of Buffalo, New York in search of employment as a maid in the home of Alyce and Parker Eaton. Sadie, the trusted family cook, gives Rebecca a trial as a house maid, which Mrs. Eaton later approves. Her services are needed to serve that evening’s birthday dinner for Alyce’s younger Brother Marshall Chambers who is visiting with their parents from Rochester. Little does Rebecca know that, later that evening, a cruel twist of fate at the hands of Marshall will forever change her future.

It isn’t long before Sadie realizes that Rebecca is pregnant and gently confronts her. The scared young woman tells her of Marshall’s attack when she delivered the pitchers of the evening’s water to the bedrooms before bedtime. Sadie offers Rebecca support to help her figure out a solution by the time she begins to show and no longer will be allowed to work for the Eatons.

Alyce is livid when she discovers Rebecca’s secret, and she orders her out of her home. Sadie steps in and tells her about Marshall’s attack. Rebecca is allowed to stay overnight while Sadie comes up with arrangements for the young woman to stay with members of her family. By morning, Alyce, who has been unable to conceive, comes up with a plan to allow Rebecca to stay as long as she gives her child up to the Eatons to raise as their own. On the eve of June 19, 1886 Rebecca goes into labor.

Fast forward to 1904 in Madelia, New York. Rebecca Galloway lives in a room with her beautiful daughter Patricia in Anne and George Kaufman’s home-store, where she works as a clerk. Patricia has no idea that she has a twin sister living in Buffalo as the daughter of the Eatons. When her mother finds out that she is dying of cancer, she is forced to reveal the secret of the birth of her twin daughters. Even the Eatons never knew about a twin. They only knew that Rebecca disappeared from their home sometime after Sadie handed them their beautiful daughter, the first of two baby girls born that night.

While Anne and Rebecca have been as close as sisters, leaving Patricia in Anne’s care isn’t possible. Husband George has a roving eye, and Rebecca fears for her daughter’s safety when she is no longer there to protect her. She makes Anne promise to send Patricia to the Eaton’s in Buffalo immediately after her funeral. Will Patricia’s journey to find her twin sister lead to acceptance or rejection when she finally meets her and her parents?

This Christian Historical Fiction, arranged in three parts, weaves the devout Christian Faith of Rebecca, Patricia, and other characters throughout the storyline. Locations include the Hotel Athenaeum at the Chautauqua Institution in Chautauqua, New York. This title is part of “The Tour of Mansion Series 1” that includes homes based on actual historical mansions that are open for public tours.

I have always been a fan of Historical Fiction Novels, and this one didn’t disappoint. The characters were interesting, and the plot held my interest such that I finished the 352 page book in two days. This well-written novel incorporates well-researched facts as to historical time periods and locations. This was my first read as part of a three-month free trial of Kindle Unlimited. I definitely will be reading another in the series.

All of us who love the Mitford Series are excited about this book. The series of 14 novels brings you into the lives of the people who live in Mitford. The main character is Father Tim, an Episcopal Priest.  In this book, we can read his prayers, sermons and his favorite passages that make up who he is. The people of Mitford also give us some advice. Ms. Karon even allows us a look at her own faith.

Once you start, there’s no escaping this dark and twisted read. The flawed characters, the corrupt small-town setting, the enigmatic twists and that ending will be more than adequate for any suspense reader. Most surprising of all is the ending.  The underlying truth is even more warped than any of the theories that will be swimming around in your brain. 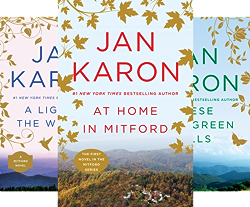 These are the best books I have ever read. The first 4 books came in a box set of paperbacks. I read these books as one. When I finished one, the next was started. At the end of the fourth book I was off to the bookstore for the next one. After that there was a year-long wait for the next to be published. However, it was worth it. Since then I have pre-ordered all the others from Amazon.

Mitford is the story of a cherished small-town rector in his sixties and never married. We get to follow Father Tim and the wonderful residents of Mitford through their daily lives. They become family, they make you laugh out load and they make you cry sometimes.

I have loaned the first book to two friends. Both of them were not sure they wanted to read the book but they both ended up reading the rest. If I could only recommend one book this would be it.

Shiloh to Canaan is a participant in the Amazon Services LLC Influencer/Associates and  Amazon Affiliates advertising programs designed to provide a means for sites to earn advertising fees by advertising and linking to Amazon.com and https:///www.amazon.com/shop/influencer-e55f1868.